skip to main | skip to sidebar

During this time period the island nation of Japan underwent a bloody era known now as the Sengoku period or 'warring states' period. For over 100 years political and military powers vied for control over the island nation. Large Samurai armies led by Daimyos shed their neighbours blood in a deadly conflict to decide who would be the next ruling Shogunate to maintain control over all of Japan. Contact with Europeans had only recently been made and while the sword and the bow were still the mainstay of any Samurai army, gun power in the form of basic arquebuses had begun to take their place amongst the rank and file soldiers.


The Time: The 15th Century! ? ! ?
(Meh...it's probably sometime towards the fall of the Kings of Spain...lets call it around
the death of Henry IV in 1474 since there was a lot of political upheaval.)
The Place: Spain!

During the early 1400's the Muslim forces that held the south of Spain known as the Almohads had almost been entirely forced from the peninsula. The only foothold they retained was the territory of Granada. Each unique territory and region that loosely made up what would over the next century become a more unified Spain held their own political and judicial structures
During the following 100 years known as the Reconquista period one of the most influential Kings Henry IV the ruler of Castile passed away. This highly sought after throne became the aim of several influential rulers of neighbouring regions.

So, now that the history lesson is done for the day...what do these two time periods have in common?

Yes. You are correct oh savvy reader, they certainly ARE both about countries at the peak of military and political infighting. If you had already guessed that both time periods have been made into games well then you are crafty beyond compare!! 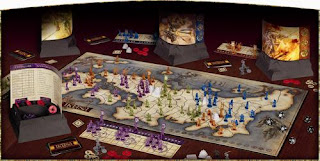 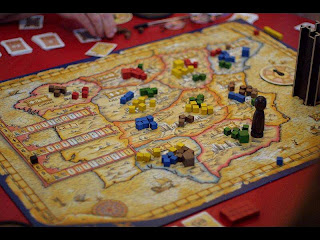 With great pleasure here is an in depth look at both,

El Grande
(Currently known by this guy as omgbbqsauce i wonzzzz!)

Both are games from my childhood and both are titles worth adding to any gaming collection.
While neither are cheap to come by both easily deliver in terms of game play, artwork/style, re playability and gorgeous manufacturing bitz.

Starting with Ikusa lets give it a thorough once over shall we?

Style of Play: As mentioned above it's an old Avalon Hill title but it plays very much like the classics Risk or Axis and Allies.
FULL STOP!

Alright that right off the bat might turn some folks off but I should reiterate.
It is what Risk and Axis and Allies SHOULD have been if only they had been combined by a loving game designer who thought everything was better once you throw in Samurai and deadly ninjas and giant Japanese castles from which you can bombard your opponents with wave after wave of angry hired Ronin!!!

So...it isn't exactly like either but has some similarities.

The combat uses D12's (cool I know) and the combat is streamlined with easy to follow melee and ranged rounds of fighting that make WAY more sense than the frequent dice fests that are Risk.
Plus they have &#%*ing swords!

Ikusa has dealt with the conundrum of how to display large forces of armies while still retaining the coolness factor of having lots of meeples to fling to their untimely demises. In Risk you need to 'upgrade' single soldiers to horses and those pony riders in turn into field artillery. These pieces have no real importance as they are all just numerical representations that you need to push around in a big clump. In Ikusa each unit is unique with its own strengths and abilities. In Risk you can attack ad nauseam in a mass clutter of units from southern Australia to Eastern America when you go on an attacking binge which makes little to no sense logistically but in Ikusa you can normally only attack a single time against a neighbouring region.

Axis and Allies steps things up a great deal from Risk because the units each are unique with separate battle statistics. Its combat system is much more akin to Ikusa but the en masse feeling of battle can often be lost visually under an ugly stack of white and black combat chips. In Ikusa the battles can still be awesomely epic while keeping the board relatively clutter free without losing the mass battle feel. Each player gets an army card with slots on it for x3 Daimyo's each with it's own unique flag. A single playing piece with the matching flag symbol represents this large force on the game board while still letting you still count out and arrange a massive force just off the edge of the board. You can draft troops turn by turn and swell your armies up or drop off units alternatively as you pass through areas but unlike Risk or Axis and Allies each army caps out at 15 units. This encourages players sitting with full armies of samurai to engage in combat that keeps each turn active! As the game progresses each victory your Daimyo's obtains will in turn increase thier skills in combat as they learn from past experiences. In subsequant turns they begin to be able to attack or move multiple squares on both offense and defense, covering great distances in the span of a single turn.

Truly this is a military classic without compare.
It has few drawbacks but those that it does suffer from may deter certain types of gamers from trying it out.
It's running time is very long easily approaching 4hours or more and like many conflict-based games it does have the drawback of potential player elimination. All in all it's worth it to see one of these Japanese death matches through to the end.
Just have any friends who get eliminated perform an elaborate Sebuku for your amusement as the game carries on without them :D

What a drastic change from Ikusa.
This game is everything that a military game isn't and is one of the best Euro-games currently out there. Here at Minotaur it had a very brief stint where it saw some play but the regulars either overlooked its elegant game mechanics or didn't get a chance to have this unique strategy grow on them.
So that's why I'm bringing it back!!!

El Grande is just too good of a game not to have on the shelf...no two ways about it.
The game is like a precursor to Agricola, Peurto Rico, Tikal and Alhambra all bundled into one. It has very familiar scoring rounds like many Rio Grande games that take place at the end of the 3rd 6th and 9th(final) turn.
The game has very verrrry limited luck in it and most of the events that will shape the outcome of the game are based off the choices players make and the strategies they chose to employ. Certain methods of play that might work well in one game or in a particular situation wont against other strategies or styles of players.

In many ways it is like Puerto Rico.
Often I've heard gamers exclaim that the players are what make or break the game but that seating position is crucial. If you are seated next to a very strong player on your left often you'll find yourself struggling when an inexperienced gamer in the same seat will spell out a drastically different outcome. El Grande also has a selection mechanic where 5 choices will be available each turn to players to chose from but unlike Puerto Rico the order of play changes round by round to keep the competition fierce.

The basics of El Grande is that each player will have small tokens representing caballeros that they will draft each turn into their court that are worth a single point of influence. They shall also have a large cube which represents themselves as a Lord or Lady of future Spain which is worth additional influence (Similar to the worker and head worker from Tikal) Through intruige subterfuge and diplomacy players must use these tokens to vy for control over different territories to eventually become the next King. The tricky part however is the King's Pawn piece which travels about the board. Players may only effect areas adjacent to where the King is and by that same rule can never add or remove units in the location the King is standing in for that particular turn.

To make things a bit trickier again the way with which you acquire more caballeros and pick your turn order is one of the best parts of the game. Each player starts with a deck of numerical cards ranging from 1 to 13 and players will pick one at the start of each round. Similar to the card game 'stupide vulture' when you spend a card it's gone for good so players need to balance saving powerful cards for turns where they'll want to go early in a round, with playing low cards that, while meaning you probably will go last and have an unfavorable action card during that turn, will allow the player a larger # of caballeros to influence regions.

Four of the action cards that crop up each turn will be unique but one that remains from round to round is the option to move the king. Often players will want to play high cards to be the 1st pick because doing so will mean you can strategically place the King's Pawn piece in a way that will limit your opponents from being able to place caballeros in the region that the King's sitting in in addition to any sections of the board that aren't adjacent as well. There are many layers to the strategy beyond this but these few basic elements are what keeps El Grande in the top 15 games on boardgamegeek. It's currently ranked 12th and whenever i reminisce about the imes I played with my Dad and Uncles back when we were all around Ottawa it always makes me grin a lot. Each one of us was pretty particular about what kind of games we enjoyed but El Grande was always our go-to game when we couldn't all agree on what to play because each one of us loved it through and through.

I personally have a copy of Ikusa now and will be searching high and low QUESTING if you will for people who want to sit down on a Sunday games night perhaps or on a different night at my place to slog through it. I also just ordered a El Grande for the store and here's hoping that one of our games night regulars decides to pick it up and bring it in a few times so that the gaming folks can see just how strong a title it is. If no one picks it up within the first week or two I'm thinking I'll buy it and bring it in and make everyone play it!

Don't make me come in and force you all to play under swordpoint!
I'll be dual wielding a rapier and a katana! ;D

This has been the labyrinth and I'm Henry McCulloch. Game On!